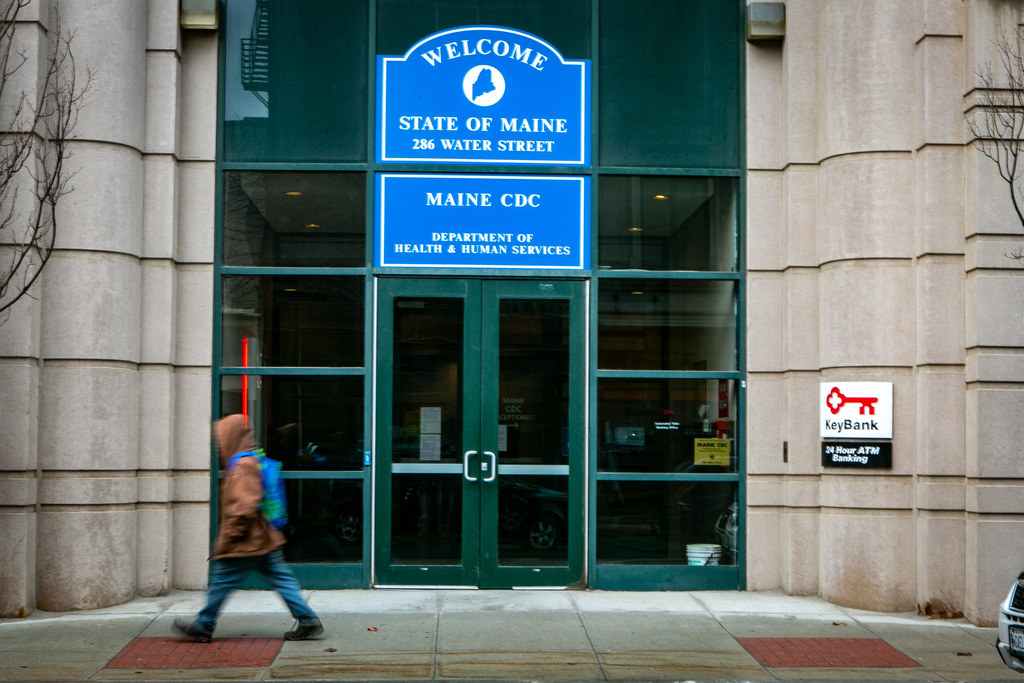 Caption: A man walks by the Maine Center for Disease Control on water Street in Augusta on Thursday. Credit: Troy R. Bennett / BDN

A COVID-19 outbreak at a nursing home on Deer Isle has grown to become one of the largest and deadliest in Maine since the pandemic arrived in March.

Sixty-two residents and 31 staff members at Island Nursing Home have tested positive for the coronavirus in just more than three weeks, since the first case was detected. Twelve residents have died, Matthew Trombley, senior executive director of Island Nursing Home, said Tuesday in a podcast.

“It’s been extraordinarily hard,” Trombley said in the podcast.

The 93 cases makes the nursing home’s outbreak the fourth largest the state has seen since the start of the pandemic in March. Maine has seen 60 virus outbreaks at long-term care facilities since the spring.

Staff and administrators have done “everything that we could” to mitigate the spread of the disease, since the nursing home’s first positive COVID test result on Nov. 23, Trombley said. That has helped the nursing home prevent “as cataclysmic an outcome as it could have been,” he said.

The facility is licensed for 38 beds in its skilled nursing facility, and has an additional 32 beds in its assisted living wing, where residents do not require nursing or rehab care.

Residents and staff members have been offered counseling services to cope with the loss, Trombley said. The Maine National Guard assisted with training and cleaning at the facility for a week, but has not been at the nursing home since early December, he said.

On its Facebook page, nursing home officials said they determined through contact tracing that an employee who wasn’t showing any symptoms brought the virus in after catching it in the community and going to work.

Robert Long, spokesperson for Maine Center for Disease Control and Prevention, said Thursday that the source of the outbreak remains under investigation.

There have been deadlier outbreaks at nursing homes in Androscoggin, Cumberland, Kennebec, Waldo and York counties, though they haven’t been deadlier by much. There have been 14 deaths associated with Durgin Pines in Kittery, which has seen a repeat COVID-19 outbreak over the past month-and-a-half after surmounting a smaller one in the spring, and 13 each at Maine Veterans Home in Scarborough and Tall Pines in Belfast, according to the Maine CDC.

The nursing homes that have seen larger numbers of cases are Russell Park Rehab and Living Center in Lewiston, with 159 total staff and resident cases, Clover Health Care in Auburn with 150 total cases from two separate outbreaks, and Gray Birch in Augusta, which has had 101 cases. Twelve people have died each at Clover Health Care and Gray Birch, while Russell Park has had six COVID-related deaths.

The outbreak at Island Nursing Home came as the COVID-19 pandemic has been picking up in Maine and Hancock County. It was one of 14 new outbreaks at nursing homes and assisted living facilities the state saw in November, even as state health officials said they were seeing a smaller proportion of Maine’s COVID-19 cases tied to outbreaks. Maine has seen 17 more outbreaks at long-term care facilities since the start of December.

Department of Health and Human Services inspectors visited the Deer Isle nursing home last week due to the outbreak, but findings from their visit have not yet been finalized, said Jackie Farwell, a department spokesperson. The nursing home was found to be in compliance with state rules during prior DHHS visits in June and September and two off-site investigations in August.

Inspectors conducted the June visit as part of a round of inspections meant to see whether nursing homes were following rules meant to prevent the spread of COVID-19.

Federal health officials and pharmacies are expected to start distributing COVID-19 vaccine doses to Maine nursing homes beginning next week. Long said the Maine CDC has no indication that nursing homes with active outbreaks will be given priority.

Would you like to stay up to date on what’s happening at the Island Medical Center? We’d love to add you to our email list.